Two triangles are said to be similar if all the corresponding angles are congruent or all the corresponding sides ratios is proportional. We also have some similarity criterion theorems to prove that two triangles are similar to each other. One among those theorems is the AA Criterion of Similarity. The complete details about this Angle-Angle Similarity Criteria are provided below along with solved questions.

What is AA Similarity Criteria?

The name of the theorem should be AAA(Angle-Angle-Angle) criterion, but it can be called as AA criterion as we require only two pairs of angles to be equal. So that the third pair will be automatically equal by the angle sum property of triangles.

Using the AA criterion, ΔABC is similar to ΔPQR. So the corresponding sides are proportional.

AA Criterion of Similarity With Proof

Examples on Angle-Angle Criterion of Similarity

Example 1:
Show that both triangles are similar. 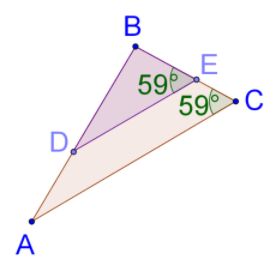 Example 3:
In a right-angled triangle, if a perpendicular is drawn from the right-angled vertex to the hypotenuse, the triangles on each side of it are similar to the whole triangle and to one another. 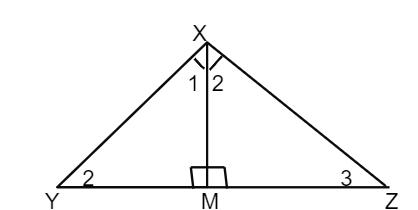 1. What is the difference between the AA and AAA similarity criterion?

2. What does AA similarity mean?

In two triangles, if two pairs of corresponding angles are congruent, then the triangleas are said to be similar.

3. Does the AA similarity criterion apply to quadrilaterals?

The AA similarity theorem does not apply to the quadrilaterals.