What is Circular System?

A circular system is a kind of system of measuring trigonometric angles. In higher mathematics angles are measured in a circular system. In this system, a radian is considered as the unit for the measurement of angles. The unit of the circular system depends on the constant relation that exists between the circumference and radius of the circle 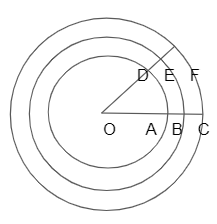 A radian is defined as an angle subtended at the centre of a circle by an arc whose length is equal to the radius of that circle.

Let OX = r and r be the radius of a circle having a centre at O. 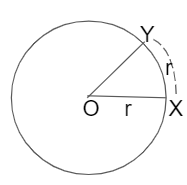 Take an arc XY of the circle so that XY = r and join OY. By definition ∠XOY = one radian = 1c

The circular measure of an angle is the number of radians it contains.

Thus the circular (radian) measure of a right angle is π/2.

Degrees to radians conversion table is given here.

In the circular system, the unit of measurement of an angle is the radian.

Theorem 1: Radian is a constant angle.

Take a circle with O as centre and r as radius, Take any two points on the circle to mark an arc AP. As per the definition of a radian, the angle formed at the centre is ∠AOP = 1c. Extend AO to meet at B so that ∠AOB = 180 degrees. 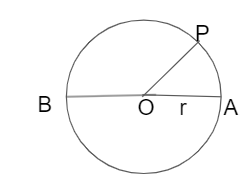 Theorem 2: The number of radians in an angle subtended by an arc of a circle at the centre is equal to \(\frac { arc }{ radius } \)

Let us take a circle with radius r and center O. Draw a diameter having ending A, B. Take any two points P, Q on the circle make an arc AP. Angle formed at the center ∠AOQ = θc. Let us take AP = r, s be the length of AQ.
Thus, ∠AOP = 1c 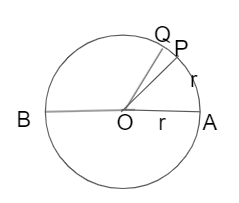 Question 2:
In a triangle, the angles are in the ratio 2 : 3 : 5, what is the value of the greatest angle in radians?

1. What is a circular measure of an angle?

The circular measure of an angle is in radians.

2. What is the circular system?

The unit of the circular system is the radian. It depends on the relationship between the radius and circumference of the circle.

3. What is a radian system?

One radian is the measure of a central angle subtended by an arc that is equal in length to the radius of the circle.