Exercise 1.
You just bought a large bag of fries from the restaurant. Do you think you have exactly 82 french fries? Why or why not?
Answer:
The number of fries in a bag seems to wary greatly from bag to bag. No bag had exactly 82 fries, so mine probably will not. The bags that were in the sample had from 66 to 93 french fries.

Example 2:
Examine the dot plot below.

Use the information from the dot plot In Example 2.

b. Suppose the teacher made a mistake, and the student who scored a 65 actually scored a 71. Would the median change? Why or why not?
Answer:
The median would not change because there would still be 14 scores below 82 5 and 14 scores above 82.5.

A grocery store usually has three checkout lines open on Saturday afternoons. One Saturday afternoon, the store manager decided to count how many customers were waiting to check out at 10 different times. She calculated the median of her ten data values to be 8 customers.

a. Why might the median be an important number for the store manager to consider?
Answer:
Answers will vary. For example, students might point out that this means that half the time there were mœe than 8 customers waiting to check out. if there are only 3 checkout lines open, there would be a lot of people waiting to check out. She might want to consider having more checkout lines open on Saturday afternoons.

b. Give another example of when the median of a data set might provide useful information. Explain your thinking.
Answer:
Answers will vary.
Possible responses: When the data are about how much time students spend doing homework, it would be interesting to know the amount of time that more than half of the students spend on homework. If you are looking at the number of points earned in a competition, it would be good to know what number separates the top half of the competitors from the bottom half.

b. Sallee claims the median is 75 because she sees that 75 is the middle number in the data set listed on the previous page. She thinks half of the bags had fewer than 75 fries because there are 9 data values that come before 75 in the list, and there are 9 data values that come after 75 in the list. Do you think she would change her mind if the data were plotted in a dot plot? Why or why not?
Answer:
Yes. You cannot find the median unless the data are organized from least to greatest. Plotting the number of fries in each bag on a dot plot would order the data correctly. You would probably get a different halfway point because the data above are not ordered from least to greatest.

c. Jake said the median was 83. What would you say to Jake?
Answer:
83 is the most common number of fries in the bags (5 bags had 83 fries), but It is not in the middle of the data.

d. Betse argued that the median was halfway between 60 and 85, or 72.5. Do you think she is right? Why or why not?
Answer:
She is wrong because the median is not calculated from the distance between the largest and smallest value in the data set. This is not the same as finding a point that separates the ordered data into two ports with the same number of values in each part.

e. Chris thought the median was 82. Do you agree? Why or why not?
Answer:
Chris is correct because ¡f you order the numbers, the middle number will be the 10th number in the ordered list, with at most 9 bags that have more than 82 fries and at most 9 bogs that have fewer than 82 fries.

Exercise 5.
Calculate the mean, and compare it to the median. What do you observe about the two values? If the mean and median are both measures of center, why do you think one of them is smaller than the other?
Answer:
The mean is 78.6, and the median is 82. The bag with only 60 fries decreased the value of the mean.

Exercise 6.
A third restaurant (Restaurant C) tallied the number of fries for a sample of bags of french fries and found the results below. 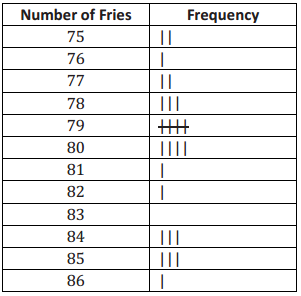 Question 1.
The amount of precipitation in each of the western states in the United States is given in the table as well as the dot plot. 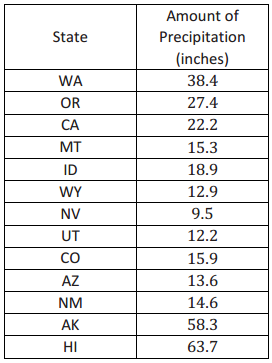 a. How do the amounts vary across the states?
Answer:
Answers will vary. The spread is pretty large: 54.2 inches. Nevada has the lowest precipitation at 9.5 inches per year. Hawaii, Alaska, and Washington have more rain than most of the states. Hawaii has the most precipitation with 63.7 inches, followed by Alaska at 58.3 inches.

c. Do you think the mean or median would be a better description of the typical amount of precipitation? Explain your thinking.
Answer:
The mean at 24.8 inches reflects the extreme values, while the median seems more typical at 15.9 inches.

Question 2.
Identify the following as true or false. If a statement is false, give an example showing why.

b. The median is halfway between the least and greatest values in the data set.
Answer:
False. For example, looking at the number of french fries per bog for Restaurant A in Example 1, the median is 82, which is not halfway between 66 and 93 (79.5).

c. At most, half of the values in a data set have values less than the median.
Answer:
True

d. In a data set with 25 different values, if you change the two smallest values in the data set to smaller values, the median will not be changed.
Answer:
True

Question 3.
Make up a data set such that the following is true:

b. The data set has 10 values, and the median is 25.
Answer:
Answers will vary. One answer is to have ten values that are all 25’s.

Question 4.
The dot plot shows the number of landline phones that a sample of people have in their homes.

b. Why do you think three people have no landline phones in their homes?
Answer:
Possible answers: Some people might only have cell phones or some people may not be able to afford a phone or may not want a phone.

Question 5.
The salaries of the Los Angeles Lakers for the 2012 – 2013 basketball season are given below. The salaries in the table are ordered from largest to smallest. 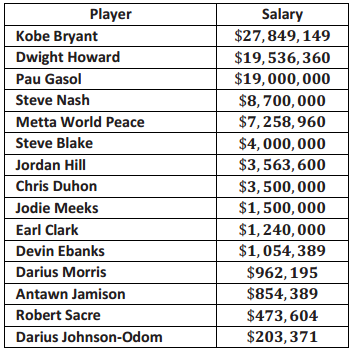 a. Just looking at the data, what do you notice about the salaries?
Answer:
Possible answer: A few of the salaries for the big stars like Kobe Bryant are really big, while others are very small in comparison.

d. Find the width of each of the following intervals. What do you notice about the size of the interval widths, and what does that tell you about the salaries?

The largest width is from the median of the upper half to the highest salary. The smaller salaries are closer together than the larger ones.

Question 6.
Use the salary table from the previous page to answer the following.

a. If you were to find the mean salary, how do you think it would compare to the median? Explain your reasoning.
Answer:
Possible answer: The mean will be a lot larger than the median because when you add in the really big salaries, the size of the mean will increase a lot.

b. Which measure do you think would give a better picture nf a typical salary for the Lakers, the mean or the median? Explain your thinking.
Answer:
Possible answer: The median seems better, os ¡t ¡s more typical of most of the salaries.

Question 1.
What is the median age for the following data set representing the ages of students requesting tickets for a summer band concert? Explain your reasoning.
13 14 15 15 16 16 17 18 18
Answer:
The median is the 5th value in the ordered list, or 16 years, as there are 4 values less than 16 and 4 values greater than or equal to 16 (excluding the 5 value).

Question 3.
Describe how you would find the median for a set of data that has 35 values. How would this be different if there were 36 values?
Answer:
Answers will vary. First, you would order the data from kast to greatest. Because there are 35 values, you would look for the 18th value from the top or bottom in the ordered list. This would be the median with 17 values above and 17 values below, if the set hod 36 values, you would find the average of the middle two data values, which would be the average of the 18th and the 19th values in the ordered list.