Example 1: Time to Get to School

Write your name and an estimate of the number of minutes it took you to get to school today on a sticky note.
Answer:
Answers will vary

What were some of the things you had to think about when you made your estimate?
Answer:
Answers will vary. Some examples include: Does it count when you have to wait in the car for your sister? I usually walk, but today I got a ride. Does it matter that we had to go a different way because the road was closed? The bus was late.

Exercises 1 – 4:
Here is a dot plot of the estimates of the times it took students in Mr. S’s class to get to school one morning.
Mr. S’s Class

Exercise 3.
Your dot plot should now be divided into four sections. Record the number of data values in each of the four sections.
Answer:
Answers will vary. Depending on the divisions, 7 or 8 in the lower one, 9 in the next, 5 in the next, and 5 in the upper section.

Exercise 4.
Share your marked-up dot plot with some of your classmates. Compare how each of you divided the dot plot into four sections.
Answer:
Different responses; students should recognize that the divisions might be close but that some are different.

The times (in minutes) for the students in Mr. S’s class have been put in order from smallest to largest and are shown below.

Exercise 5.
What is the value of the median time to get to school for students in Mr. S’s class?
Answer:
There are 27 times in the data set, so the median is the 14th value in the ordered list. The median is 15.

Exercise 7.
The lines on the dot plot below indicate the location of the median, the lower quartile, and the upper quartile. These lines divide the data set into four parts. About what fraction of the data values are in each part?
Mr. S’s Class

You will end up with a graph that looks something like this:

Exercise 8.
Find the median of the group. Does someone represent the median? If not, who is the closest to the median?
Answer:
Answers will vary depending on the data.

Exercise 9.
Find the maximum and minimum of the group. Who are they?
Answer:
Answers will vary depending on the data.

Exercise 11.
Sketch the box plot for this data set.
Answer:
Answers will vary depending on the data.

Question 1.
Dot plots for the amount of time it took students in Mr. S’s and Ms. J’s classes to get to school are below. 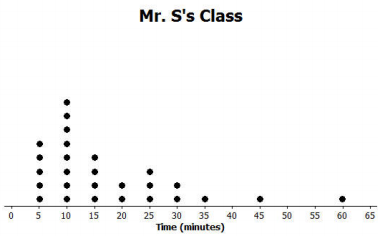 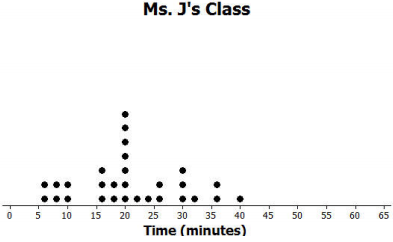 a. Make a box plot of the times for each class.
Answer:

a. Make a box plot of the temperatures.
Answer:

b. Make a prediction about the part of the United States you think the city might be located in. Explain your reasoning.
Answer:
Answers will vary. The city was probably somewhere in the northern states, either in the Midwest or Northeast, maybe Montana or Wyoming, because the temperatures are typically pretty cold in those regions.

Question 4.
The box plot below summarizes data from a survey of households about the number of dogs they have. Identify each of the following statements is true or false. Explain your reasoning in each case.

a. The maximum number of dogs per house is 8.
Ans;
True, because the line segment at the top goes to 8.

b. At least of the houses have 2 or more dogs.
Answer:
True, because 2 is the median.

c. All of the houses have dogs.
Answer:
False, because the lower line segment starts at 0, so at least one household does not have a dog as a pet.

e. Most of the houses surveyed have no dogs.
Answer:
False, because at least \(\frac{3}{4}\) of those surveyed had 1 or more dogs.

Question 1.
Sulee explained how to make a box plot to her sister as follows:

And then one more mark belongs halfway between 20 and 30, which would be at 25. Now, you put a box around the three middle marks, and draw lines from the box to the smallest and largest values.” Here is her box plot. What would you say to Sulee?

Answer:
Sulee is wrong. This is not the correct way to create a box plot. Sulee did not find the median or the quartiles using the data values; she just divided up the length between the smallest and largest numbers into four equal sections. For a box plot, the sections will not always have the same length, but there will be the same number of observations in the sections.

Teacher note: This Exit Ticket problem addresses a very common student misconception about box plots. Make sure students understand how the median and quartiles are used to create the four sections of the box plot.