Example 1: Crocodiles and Alligators
Scientists are interested in finding out how different species adapt to finding food sources. One group studied crocodilians to find out how their bite force was related to body mass and diet. The table below displays the information they collected on body mass (in pounds) and bite force (in pounds). 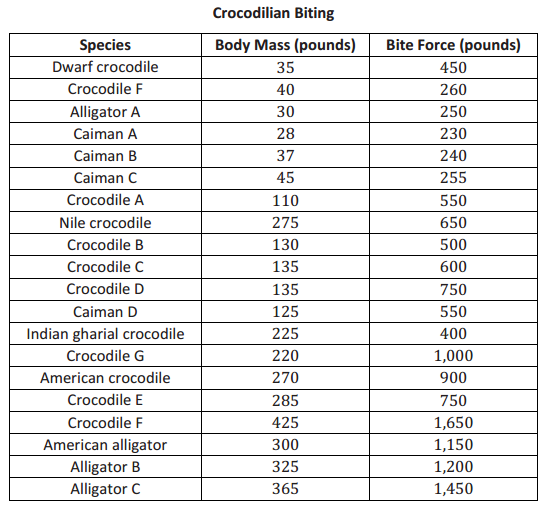 Data Source: http://journals.plos.org/plosone/article?id = 10.1371/journal.pone.0031781#pone – 0031781 – t001
(Note: Body mass and bite force have been converted to pounds from kilograms and newtons, respectively.)
As you learned in the previous lesson, it is a good idea to begin by looking at what a scatter plot tells you about the data. The scatter plot below displays the data on body mass and bite force for the crocodilians in the study. 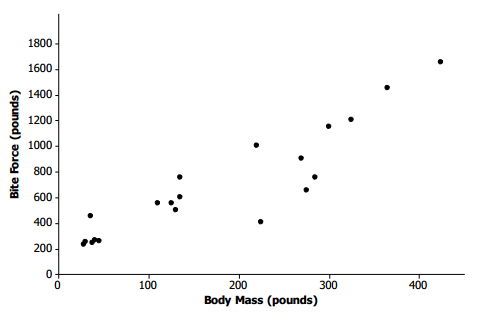 Exercise 1.
Describe the relationship between body mass and bite force for the crocodilians shown in the scatter plot.
Answer:
As the body mass increases, the bite force tends to also increase.

Exercise 2.
Draw a line to represent the trend in the data. Comment on what you considered in drawing your line.
Answer:
The line should be as close as possible to the points in the scatter plot. Students explored this idea in Lesson 8.

Exercise 4.
Several students decided to draw lines to represent the trend in the data. Consider the lines drawn by Sol, Patti, Marrisa, and Taylor, which are shown below. 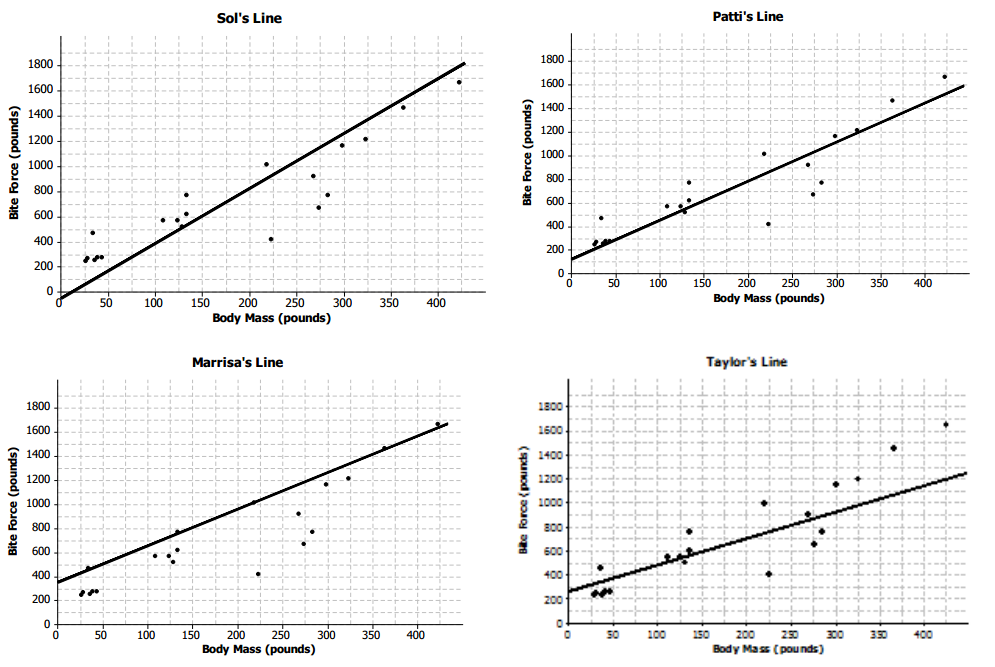 b. Patti’s line
Answer:
Patti’s line looks like it fits the data well, so it would probably produce good predictions. The line goes through the middle of the points in the scatter plot, and the points are fairly close to the line.

c. Marrisa’s line
Answer:
It looks like Marrisa’s line overestimates the bite force because almost all of the points are below the line.

d. Taylor’s line
Answer:
It looks like Taylor’s line tends to underestimate the bite force. There are many points above the line.

Exercise 5.
What is the equation of your line? Show the steps you used to determine your line. Based on your equation, what is your prediction for the bite force of a crocodilian weighing 200 pounds?
Answer:
Answers will vary. Students have learned from previous modules how to find the equation of a line. Anticipate students to first determine the slope based on two points on their lines. Students then use a point on the line to obtain an equation in the form y = mx + b (or y = a + bx). Students use their lines to predict a bite force for a crocodilian that weighs 200 pounds. A reasonable answer would be around 800 pounds. 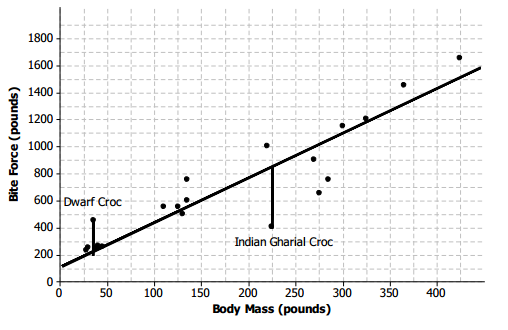 b. Would it be preferable to describe the trend in a scatter plot using a line that makes the differences in the actual and predicted values large or small? Explain your answer.
Answer:
It would be better for the differences to be as small as possible. Small differences are closer to the line.

Exercise 7.
Suppose the plot below shows the age (in years) and price (in dollars) of used compact cars that were advertised in a local newspaper. 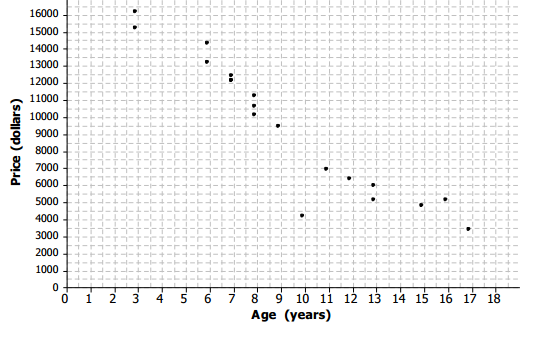 a. Based on the scatter plot above, describe the relationship between the age and price of the used cars.
Answer:
The older the car, the lower the price tends to be. 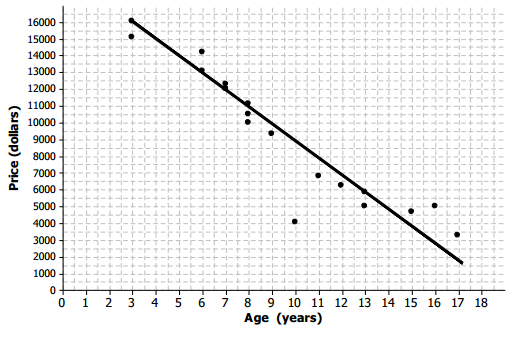 Answer:
The points are at the intersection of the grid lines in the graph, so it is easy to determine the coordinates of these points.

c. Find the equation of Nora’s line for predicting the price of a used car given its age. Summarize the trend described by this equation.
Answer:
Using the points, the equation is y = – 1000x + 19000, or Price = – 1000(age) + 19000. The slope of the line is negative, so the line indicates that the price of used cars decreases as cars get older.

f. Is $5,000 typical of the differences between predicted prices and actual prices for the cars in this data set? Justify your answer.
Answer:
No, most of the differences would be much smaller than $5,000. Most of the points are much closer to the line, and most predictions would be within about $1,000 of the actual value.

Question 1.
The Monopoly board game is popular in many countries. The scatter plot below shows the distance from “Go” to a property (in number of spaces moving from “Go” in a clockwise direction) and the price of the properties on the Monopoly board. The equation of the line is P = 8x + 40, where P represents the price (in Monopoly dollars) and x represents the distance (in number of spaces). 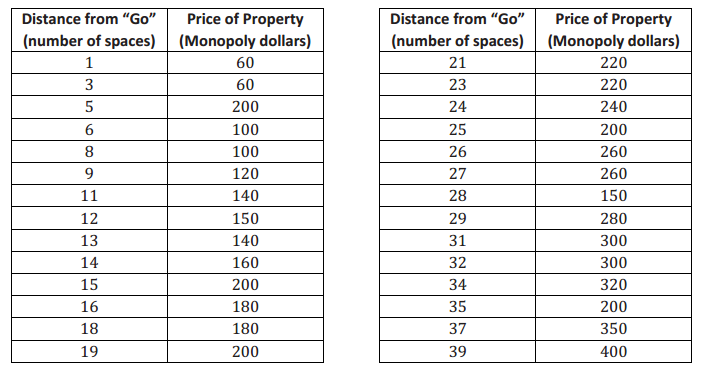 Price of Property Versus Distance from “Go” in Monopoly 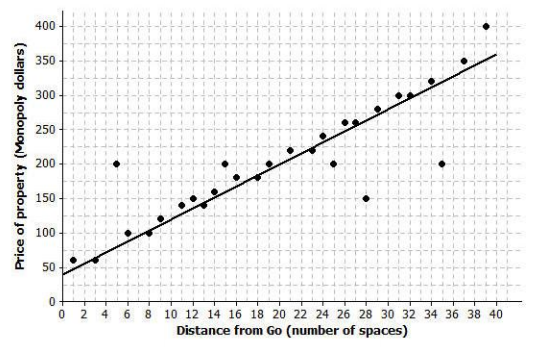 c. Four of the five points described in part (b) are the railroads. If you were fitting a line to predict price with distance from “Go,” would you use those four points? Why or why not?
Answer:
Answers will vary. Because the four points are not part of the overall trend in the price of the properties, I would not use them to determine a line that describes the relationship. I can show this by finding the total error to measure the fit of the line. 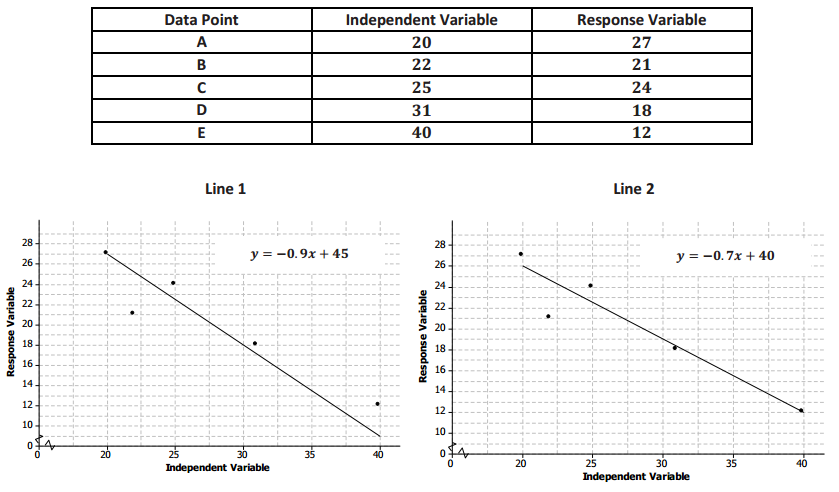 a. Find the predicted response values for each of the two lines. 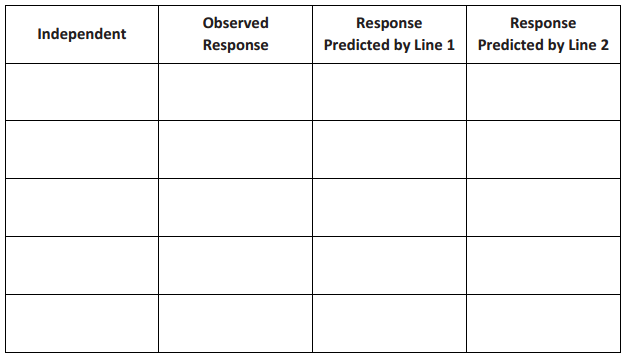 c. Which line (Line 1 or Line 2) would you select as a better fit? Explain.
Answer:
Line 2 is a better fit because it is closer to more of the data points. 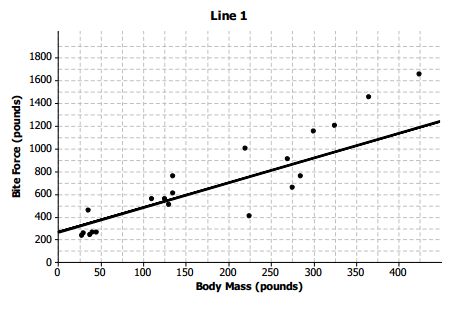 Answer:
Equation: 3
The intercept of 267 appears to match the graph, which has the second largest intercept. 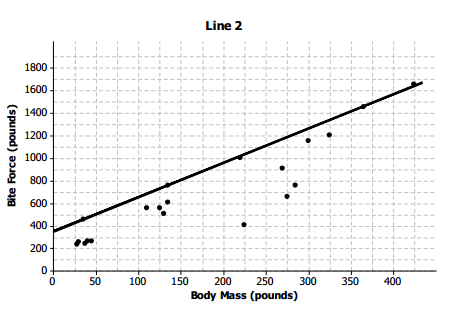 Answer:
Equation: 2
The intercept of Equation 2 is larger, so it matches Line 2, which has a y – intercept closer to 400. 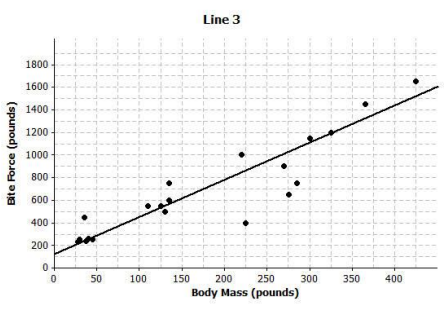 Answer:
Equation: 1
The intercept of Equation 1 is the smallest, which seems to match the graph.

b. Which of the lines would best fit the trend in the data? Explain your thinking.
Answer:
Answers will vary. Line 3 would be better than the other two lines. Line 1 is not a good fit for larger weights, and Line 2 is above nearly all of the points and pretty far away from most of them. It looks like Line 3 would be closer to most of the points.

Question 4.
Comment on the following statements:
a. A line modeling a trend in a scatter plot always goes through the origin.
Answer:
Some trend lines go through the origin, but others may not. Often, the value (0, 0) does not make sense for the data.

Question 1.
The scatter plot below shows the height and speed of some of the world’s fastest roller coasters. Draw a line that you think is a good fit for the data. 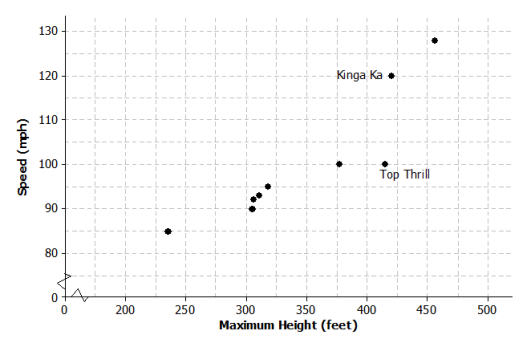 Answer:
Students would draw a line based on the goal of a best fit for the given scatter plot. A possible line is drawn below.