Classwork
Proof of the Pythagorean Theorem 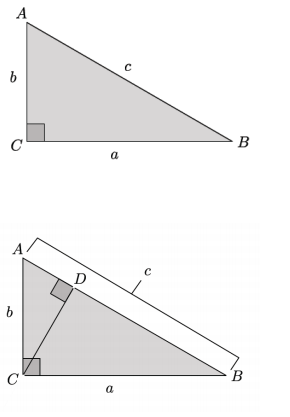 Answer:
Using one right triangle, we created 3 right triangles. Name those triangles.
The three triangles are △ABC, △ACD, and △BCD.
We can use our basic rigid motions to reorient the triangles so they are easier to compare, as shown below.

Answer:
→ The next step is to show that these triangles are similar. Begin by showing that
△ADC ~ △ACB. Discuss in your group.
△ADC and △ACB are similar because they each have a right angle, and they each share ∠A. Then, by the AA criterion for similarity, △ADC ~ △ACB.

→ Now, show that △ACB ~ △CDB. Discuss in your group.
△ACB ~ △CDB because they each have a right angle, and they each share ∠B. Then, by the AA criterion for similarity,
△ACB ~ △CDB.

→ Let’s identify the segments that comprise side c as follows: |AD| = x and |BD| = y. (Ensure that students note x and y in their student materials.) Using this notation, we see that side c is equal to the sum of the lengths x and y (i.e., x + y = c). 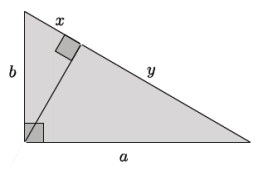 Let’s draw three squares on the right triangle. Notice that we can use the altitude to divide the large square, of area c2, into two rectangles as shown. Call them rectangle I and rectangle II. 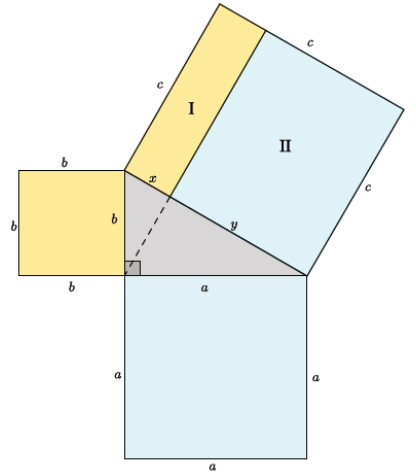 → What would it mean, geometrically, for a2 + b2 to equal c2?
It means that the sum of the areas of a2 and b2 is equal to the area c2.
There are two possible ways to continue; one way is by examining special cases on grid paper, as mentioned in the scaffolding box on the previous page, and showing the relationship between the squares physically. The other way is by using the algebraic proof of the general case that continues below.
→ What is the area of rectangle I?
The area of rectangle I is xc.
This is where the proof using similar triangles just completed is helpful. We said that x = \(\frac{b^{2}}{c}\). Therefore, the area of rectangle I is
xc = \(\frac{b^{2}}{c}\)⋅c = b2.

→ Now use similar reasoning to determine the area of rectangle II.
The area of rectangle II is yc. When we substitute \(\frac{a^{2}}{c}\) for y we get yc = \(\frac{a^{2}}{c}\)⋅c = a2.
→ Explain how the work thus far shows that the Pythagorean theorem is true.
The Pythagorean theorem states that given a right triangle with lengths a, b, c, then a2 + b2 = c2. The diagram shows that the area of the rectangles drawn off of side c have a sum of a2 + b2. The square constructed off of side c clearly has an area of c2. Thus, the diagram shows that the areas
a2 + b2 are equal to the area of c2, which is exactly what the theorem states.

To solidify student understanding of the proof, consider showing students the six-minute video located at http://www.youtube.com/watch?v = QCyvxYLFSfU. If multiple computers or tablets are available, have small groups of students watch the video together so they can pause and replay parts of the proof as necessary. 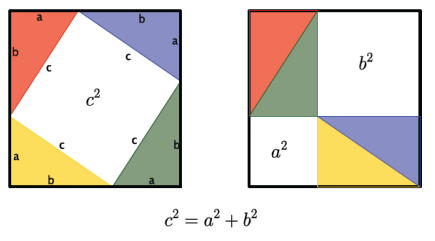 Question 1.
For the right triangle shown below, identify and use similar triangles to illustrate the Pythagorean theorem. 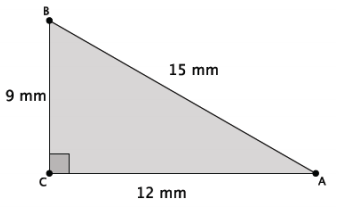 Answer:
First, I must draw a segment that is perpendicular to side AB that goes through point C. The point of intersection of that segment and side AB will be marked as point D. 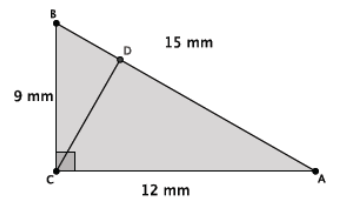 Question 2.
For the right triangle shown below, identify and use squares formed by the sides of the triangle to illustrate the Pythagorean theorem. 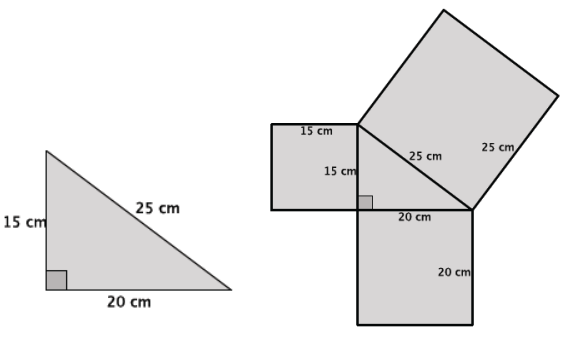 Question 3.
Reese claimed that any figure can be drawn off the sides of a right triangle and that as long as they are similar figures, then the sum of the areas off of the legs will equal the area off of the hypotenuse. She drew the diagram by constructing rectangles off of each side of a known right triangle. Is Reese’s claim correct for this example? In order to prove or disprove Reese’s claim, you must first show that the rectangles are similar. If they are, then you can use computations to show that the sum of the areas of the figures off of the sides a and b equals the area of the figure off of side c. 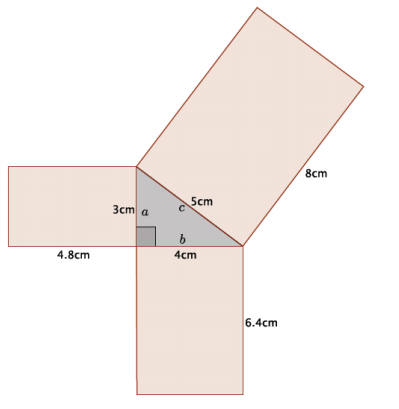 Answer:
The rectangles are similar because their corresponding side lengths are equal in scale factor. That is, if we compare the longest side of the rectangle to the side with the same length as the right triangle sides, we get the ratios
\(\frac{4.8}{3}\) = \(\frac{6.4}{4}\) = \(\frac{8}{5}\) = 1.6.
Since the corresponding sides were all equal to the same constant, then we know we have similar rectangles. The areas of the smaller rectangles are 14.4 cm2 and 25.6 cm2, and the area of the largest rectangle is 40 cm2. The sum of the smaller areas is equal to the larger area:
14.4 + 25.6 = 40
40 = 40.
Therefore, we have shown that the sum of the areas of the two smaller rectangles is equal to the area of the larger rectangle, and Reese’s claim is correct.

Question 4.
After learning the proof of the Pythagorean theorem using areas of squares, Joseph got really excited and tried explaining it to his younger brother. He realized during his explanation that he had done something wrong. Help Joseph find his error. Explain what he did wrong. 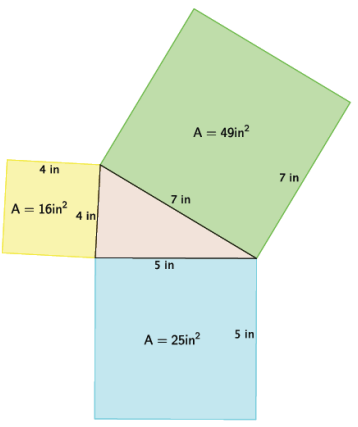 Answer:
Based on the proof shown in class, we would expect the sum of the two smaller areas to be equal to the sum of the larger area (i.e., 16 + 25 should equal 49). However, 16 + 25 = 41. Joseph correctly calculated the areas of each square, so that was not his mistake. His mistake was claiming that a triangle with side lengths of 4, 5, and 7 was a right triangle. We know that the Pythagorean theorem only works for right triangles. Considering the converse of the Pythagorean theorem, when we use the given side lengths, we do not get a true statement.
42 + 52 = 72
16 + 25 = 49
41 ≠ 49
Therefore, the triangle Joseph began with is not a right triangle, so it makes sense that the areas of the squares were not adding up like we expected.

Question 5.
Draw a right triangle with squares constructed off of each side that Joseph can use the next time he wants to show his younger brother the proof of the Pythagorean theorem.
Answer:
Answers will vary. Verify that students begin, in fact, with a right triangle and do not make the same mistake that Joseph did. Consider having students share their drawings and explanations of the proof in future class meetings.

Question 6.
Explain the meaning of the Pythagorean theorem in your own words.
Answer:
If a triangle is a right triangle, then the sum of the squares of the legs will be equal to the square of the hypotenuse. Specifically, if the leg lengths are a and b, and the hypotenuse is length c, then for right triangles a2 + b2 = c2.

Question 1.
Explain a proof of the Pythagorean theorem in your own words. Use diagrams and concrete examples, as necessary, to support your explanation.
Answer:
Proofs will vary. The critical parts of the proof that demonstrate proficiency include an explanation of the similar triangles △ADC, △ACB, and △CDB, including a statement about the ratio of their corresponding sides being equal, leading to the conclusion of the proof.