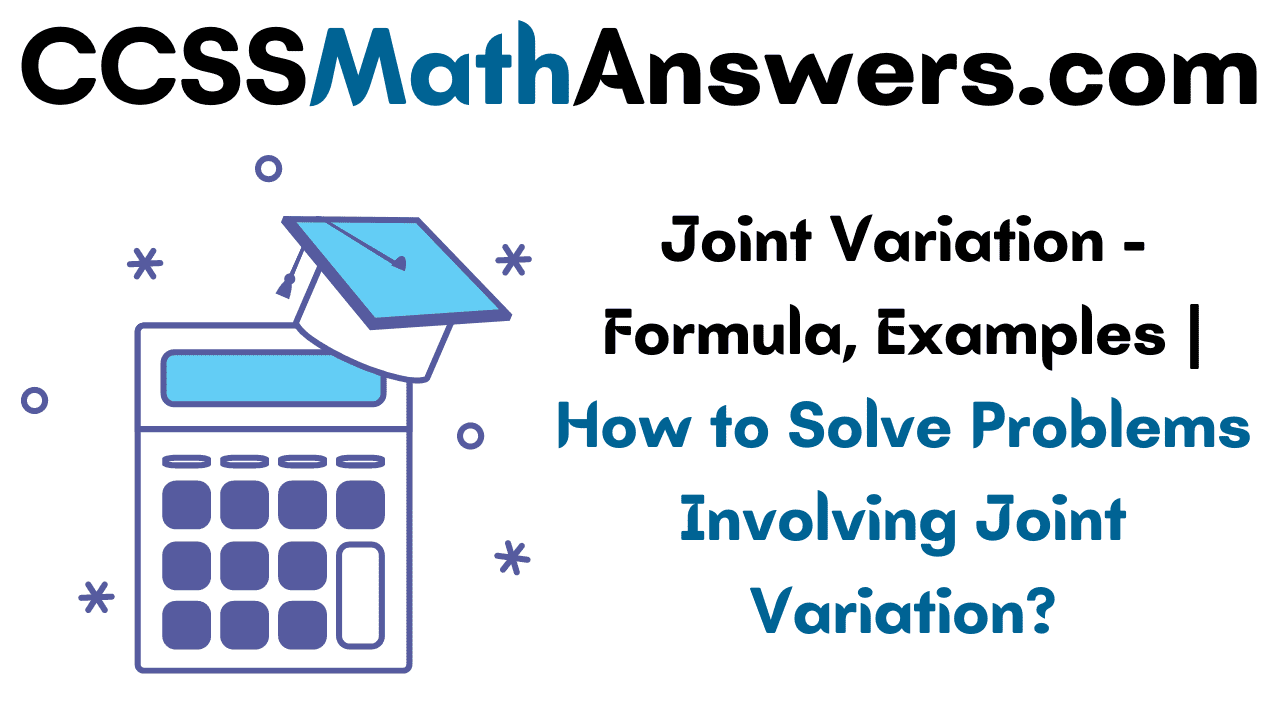 Joint Variation definition, rules, methods and formulae are here. Check the joint variation problems and solutions to prepare for the exam. Refer to problems of direct and inverse variations and the relationship between the variables. Know the different type of variations like inverse, direct, combined and joint variation. Go through the below sections to check definition, various properties, example problems, value tables, concepts etc.

Joint Variation refers to the scenario where the value of 1 variable depends on 2 or more and other variables that are held constant. For example, if C varies jointly as A and B, then C = ABX for which constant “X”. The joint variation will be useful to represent interactions of multiple variables at one time.

Most of the situations are complicated than the basic inverse or direct variation model. One or the other variables depends on the multiple other variables. Joint Variation is nothing but the variable depending on 2 or more variables quotient or product. To understand clearly with an example, The amount of busing candidates for each of the school trip varies with the no of candidates attending the distance from the school. The variable c (cost) varies jointly with n (number of students) and d (distance).

Joint Variation problems are very easy once you get the perfection of the lingo. These problems involve simple formulae or relationships which involves one variable which is equal to the “one” term which may be linear (with just an “x” axis), a quadratic equation (like “x²) where more than one variable (like “hr²”), and square root (like “\sqrt{4 – r^2\,}4−r2​”) etc.

Functions of 2 or More Variables

It is very uncommon for the output variable to depend on 2 or more inputs. Most of the familiar formulas describe the several variables functions. For suppose, if the rectangle perimeter depends on the length and width. The cylinder volume depends on its height and radius. The travelled distance depends on the time and speed while travelling. The function notation of the formulas can be written as

V = f(r,h) = Πr²h where V is the volume and is a function of radius and height

You can easily make graphs in three dimensions for two-variable functions. Instead of representing graphs, we represent functions by holding two or one variable constants.

How to Solve Joint Variation Problems?

Follow the step by step procedure provided below to solve problems involving Joint Variation and arrive at the solution easily. They are along the lines

Step 1: Write the exact equation. The problems of joint variation can be solved using the equation y =kxz. While dealing with the word problems. you should also consider using variables other than x,y and z. Use the variables which are relevant to the problem being solved. Read the problem carefully and determine the changes in the equation of joint variation such as cubes, squares or square roots.

Step 2: With the help of the information in the problem, you have to find the value of k which is called the constant of proportionality and variation.

Step 3: Rewrite the equation starting with 1 substituting the value of k and found in step 2.

Step 4: Use the equation in step 3 and the information in the problem to answer the question. While solving the word problems, remember including the units in the final answer.

The area of the triangle is represented with A

The base is represented with b

Height is represented with h

As given in the question,

A = kbh where k is the constant value

Divide by 24 on both sides, we get

As the equation is

Dividing both sides by 4, we get

Let w be the wind resistance

Let v be the object velocity

w = ksv where k is the constant

Hence, the final solution is 55mph

For the given interest, SI (simple interest) varies jointly as principal and time. If 2,500 Rs left in an account for 5 years, then the interest of 625 Rs. How much interest would be earned, if you deposit 7,000 Rs for 9 years?

Let i be the interest

Let p be the principal

Let t be the time

The time is 5 hours

i = kpt where k is the constant

Substituting the values in the equation,

To find the interest where the deposit is 7000Rs for 9 years, use the equation

Let v be the volume of a pyramid

Let h be the height of a pyramid

Let a be the area of a pyramid

V = Kha where K is the constant,

Divide 504 on both sides

Therefore, the final solution is 252 ft³

As given in the question,

The distance at which the oil is travelling = 200 miles

A = kds² where k is constant

Dividing both sides by 200

Therefore, 90 barrels of oil is used when the ship travels 360 miles at 18 miles per hour

Thus, the final solution is 90 barrels