In this article, you can know about the Midpoint Theorem which is invented by Rene Descartes, the famous mathematician. In geometry, the midpoint theorem benefits to find the missing values of the sides of the triangle. The midpoint theorem is one of the important theorems in the concept of geometry.

The midpoint theorem deals with the properties of triangles. Students can learn about the definition, statement, formula, proof of the Midpoint Theorem, and examples to find the coordinates of the defined points.

The term midpoint means the ‘center’ of something, it is the midway between the two endpoints. The midpoint theorem expresses that the line segment joining the midpoints of any two sides of a triangle is parallel to the third side of the triangle. A midpoint generally means a point on a line segment that has an equal distance from both endpoints and bisects the line segment. 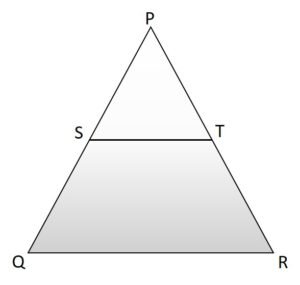 Consider the triangle PQR, as shown in the above figure

Now, if you consider the below figure, it is an extended version of the above figure provided. 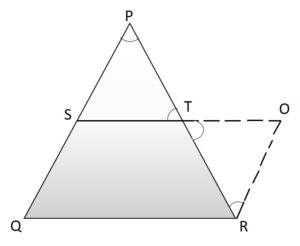 Extend the line segment ST and produce it to point O such that, OT = ST.

In a triangle, PST and TOR,

Assume OR and PQ  as two lines that are intersected by the transversal SO.

Let us again assume that OR and PQ are the two lines that are intersected by the transversal PR.

By the properties of a parallelogram, we can write

Hence, the midpoint theorem is proved.

If (x1, y1) and (x2, y2) are the coordinates of two given endpoints, then the midpoint formula is as follows 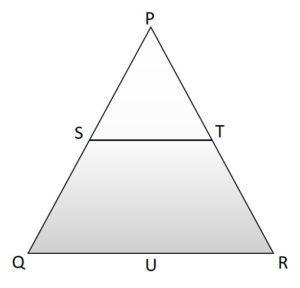 2. Why is important to define a midpoint?
The midpoint formula applies when one is needed to find the exact center point between two defined points. A line segment has to use this formula to calculate the exact point that bisects a line segment defined by the two given points.