In a deck or pack of playing cards, you will find the 52 playing cards which are divided into 4 suits of 13 cards. The shapes of those 4 suits are i.e. spades ♠ hearts ♥, diamonds ♦, clubs ♣. Also, these 4 suits are colored in two colors ie., red and black. Spades and clubs are black in color and the remaining Diamonds and hearts are Red in color.

The four different types of cards are shown in the picture given below.

How are 52 Cards Divided? 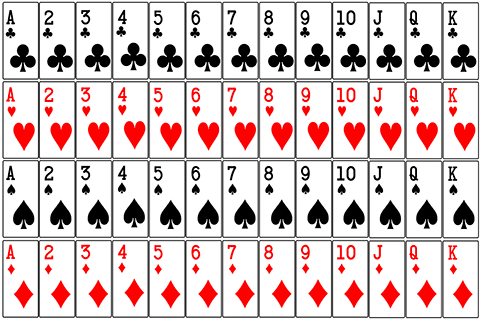 Also, have a look at the below points to memorize easily about the pack of 52 playing cards:

Probability = No. of favorable comes/ No.of all possible outcomes
or
P(A) = n(A)/n(S)

How to Find the Probability of Playing Cards?

A card is drawn at random from a well-shuffled deck of 52 cards. What is the probability that the drawn card is Queen?

Assume E be the event of drawing a Queen Card.

In total there are 4 Queen cards in 52 playing cards

And, we know that

Now, apply the formula to find the playing cards probability for the drawn card,

So, the probability of getting a Queen card is 1/13.

A card is drawn from a well-shuffled pack of 52 cards. Find the probability of getting a card of Heart.

Let A represents the event of getting a Heart cart.

Here, the total no. of possible outcomes of A is 52

P(A) = No.of favourable comes/ a total no. of possible outcomes of A

Hence, the required probability of getting a card of Heart is 1/4.