A triangle is a type of polygon that has three sides, angles, vertices. The point where two sides intersect is called vertex and an angle is formed between two sides. The important properties of angles of triangle detail are included here for the convenience of the students. As a part of learning geometry and measurement, you can get the complete details of triangle properties on this page.

Properties of Angles of a Triangle

Based on the angle, triangles are divided into three types. They are acute, obtuse and right triangles. The complete details of important the properties of angles of a triangle are along the lines:

The sum of three angles in a triangle is equal to 180°.
Example: 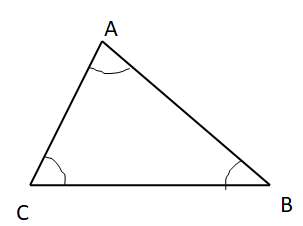 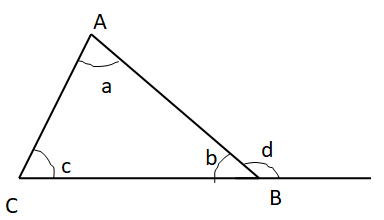 The side opposite the greater angle is the longest side of all the three sides of a triangle.
Example:

The longest angle is ∠A. So, the longest side is BC.

The exterior angle of the triangle is equal to the sum of the two opposite interior angles.
Example:

Here, d is the exterior angle and a, c are opposite interior angles.
d = a + c.

Every triangle will have the following properties.

Solved Questions on Properties of Angles of a Triangle

Find the values of x, y. 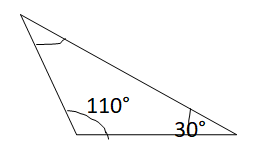 Find the value of the unknown angle.

1. What are the two properties of triangles?

2. What are the properties of angles in a triangle?

3. What is the area and perimeter of the triangle?

The area of the triangle is the region occupied by the triangle and the perimeter is the length of the outer boundary.

4. How many types of triangles are there in Maths?