In geometry, you will various math concepts like Angles, Lines, Shapes, Area and Perimeter, etc. Today, we will discuss completely the concept named Angles and its types. Based on measurements, there are various types of angles. Usually, an angle is measured in degrees and it is one of the core concepts of geometry in Maths. Are you excited to learn deeply about the topic called Angle? Then, refer to the below modules thoroughly and know what is an angle, what are the Types of Angles, definitions, figures, and some solved examples.

What is an Angle?

An Angle is a geometrical shape formed when two rays join with a common end-point. “side and vertex’ are the two components of an angle. Angles are classified based on their measures.

If these two ray joins in various fashions to form a various type of angles in maths. Let’s, start learning what are the different types of angles and their definitions and figures.

In nature, there are several types of angles that exist. Each and every angle of them hold great value in our everyday living standards.

Basically, Angles are classified on the basis of:

Types of Angles Based on Magnitude

In maths, mainly, there are 6 types of angles on the basis of direction. And also, all these six angle types are commonly used in geometry. The names of different angles types are as follows:

The below image illustrates specific types of angles based on magnitude: 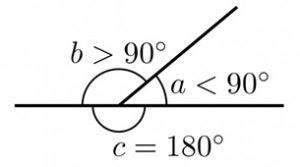 An acute angle is an angle that lies between 0 degrees to 90 degrees. In other words, an angle is less than 90° is called an acute angle.

∠XYZ is greater than 0° but less than 90° so, this is an acute angle type.

Opposite of the Acute angle is called Obtuse Angle. In other words, the angle that lies between 90 degrees and 180 degrees is known as the obtuse angle.

An angle that measures at exactly 90 degrees is called a right angle. Basically, it forms when two lines are perpendicular to each other. See the below-illustrated figure of a right angle. 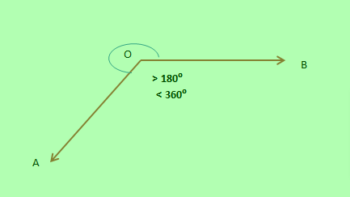 An angle measured 360 degrees is called a Complete Angle. 1 Revolution is equal to 360° and the illustration of the complete angle is as shown in the below figure:

Solved Examples on Types of Angles

Therefore, the value of x is 26 degrees.

The angle be x°