Exercise 1.
Bryan and ShaNiece are both training for a bike race and want to compare who rides his or her bike at a faster rate. Both bikers use apps on their phones to record the time and distance of their bike rides. Bryan’s app keeps track of his route on a table, and ShaNiece’s app presents the information on a graph. The information is shown below.

a. At what rate does each biker travel? Explain how you arrived at your answer.
Answer: 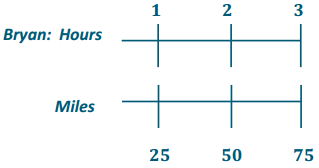 b. ShaNiece wants to win the bike race. Make a new graph to show the speed ShaNiece would have to ride her bike in order to beat Bryan.
Answer: 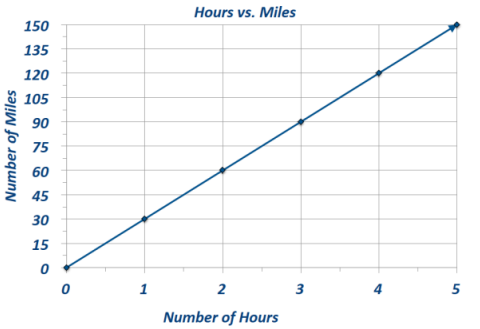 The graph shows ShaNiece traveling at a rate of 30 miles per hour, which is faster than Bryan’s rate.

Exercise 2.
Braylen and Tyce both work at a department store and are paid by the hour. The manager told the boys they both earn the same amount of money per hour, but Braylen and Tyce did not agree. They each kept track of how much money they earned in order to determine if the manager was correct. Their data is shown below.

a. How much did each person earn in one hour?
Answer: 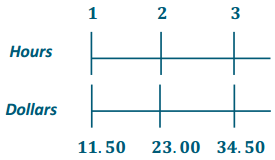 b. Was the manager correct? Why or why not?
Answer:
The manager was not correct because Tyce earned $1 more than Braylen in one hour.

Exercise 3.
Claire and Kate are entering a cup stacking contest. Both girls have the same strategy: stack the cups at a constant rate so that they do not slow down at the end of the race. While practicing, they keep track of their progress, which is shown below. 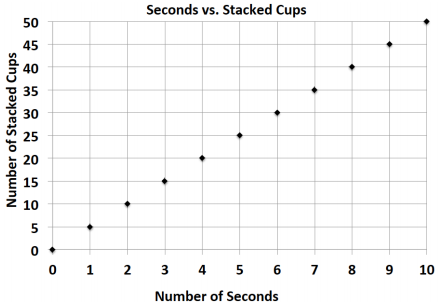 b. Kate notices that she is not stacking her cups fast enough. What would Kate’s equation look like if she wanted to stack cups faster than Claire?
Answer:
Answers will vary. c = 6t, where t represents the time in seconds, and c represents the number of cups stacked.

Victor was having a hard time deciding which new vehicle he should buy. He decided to make the final decision based on the gas efficiency of each car. A car that is more gas efficient gets more miles per gallon of gas. When he asked the manager at each car dealership for the gas mileage data, he received two different representations, which are shown below. 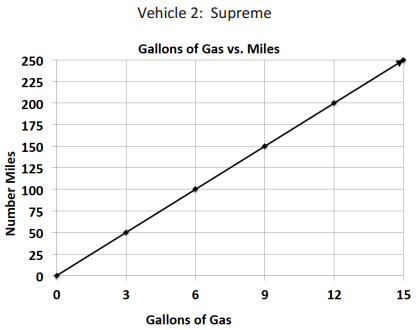 Question 1.
If Victor based his decision only on gas efficiency, which car should he buy? Provide support for your answer.
Answer:
Victor should buy the Legend because it gets 18 miles per gallon of gas, and the Supreme only gets 16\(\frac{2}{3}\) miles per gallon. Therefore, the Legend is more gas efficient.

Question 2.
After comparing the Legend and the Supreme, Victor saw an advertisement for a third vehicle, the Lunar. The manager said that the Lunar can travel about 289 miles on a tank of gas. If the gas tank can hold 17 gallons of gas, is the Lunar Victor’s best option? Why or why not?
Answer:
The Lunar is not a better option than the Legend because the Lunar only gets 17 miles per gallon, and the Legend gets 18 miles per gallon. Therefore, the Legend is still the best option. 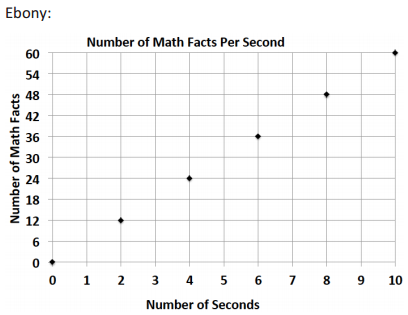