Example 2: Using Random Numbers to Select a Sample
The histogram indicates the differences in the number of words in the collection of 150 books. How many words are typical for a best-selling children’s book? Answering this question would involve collecting data, and there would be variability in those data. This makes the question a statistical question. Think about the 150 books used to create the histogram on the previous page as a population. How would you go about collecting data to determine the typical number of words for the books in this population?

How would you choose a random sample from the collection of 150 books discussed in this lesson? 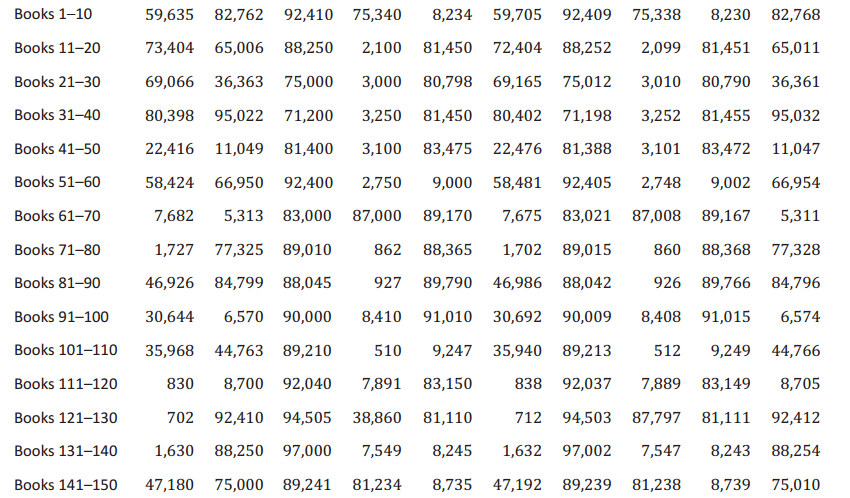 If necessary, explain how to use ten numbers selected from a bag that contains the numbers from 1 to 150 to select the books for the sample.

Exercise 1.
From the table, choose two books with which you are familiar, and describe their locations in the data distribution shown in the histogram.
Answer:
Answers will vary. Sample response: I read The Mouse and the Motorcycle, and that has 22,416 words. It is below the median number of words and may be below the lower quartile. Harry Potter and the Chamber of Secrets has 84,799 words. It is one of the books with lots of words but may not be in the top quarter for the total number of words.

Exercise 2.
Put dots on the number line below that you think would represent a random sample of size 10 from the number of words distribution above.

Answer:
Answers will vary. The sample distribution might have more values near the maximum and minimum than in the center.

Exercise 4.
Choose two more different random samples of size 10 from the data, and make a dot plot of each of the three samples.
Answer:
Answers will vary. One possible response is displayed below. 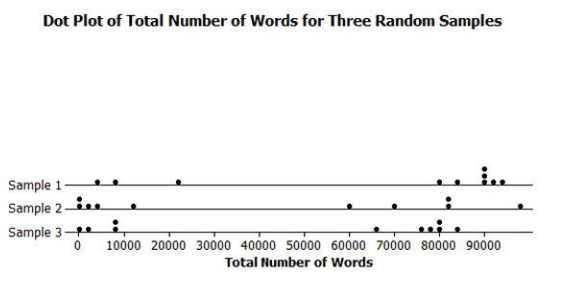 Exercise 5.
If your teacher randomly chooses 10 books from your summer vacation reading list, would you be likely to get many books with a lot of words? Explain your thinking using statistical terms.
Answer:
Answers will vary. Sample response: From my samples, it looks like I probably would get at least one book that had over 90,000 words because the maximum in each of the samples approached or exceeded 90,000 words. The three samples vary a lot, probably because the sample size is only 10. The median numbers of words for the three samples were about 86,000, 35,000, and 70,000, respectively, so it seems like at least half of the books would contain about 50,000 or more words.

Exercise 6.
If you were to compare your samples to your classmates’ samples, do you think your answer to Exercise 5 would change? Why or why not?
Answer:
Answers will vary. Sample response: The sample size is pretty small, so different samples might be different. I still think that I would have to read some books with a lot of words because of the shape of the population distribution.

Exercises 7–9: A Statistical Study of Balance and Grade

Exercise 8.
Berthio’s class decided to measure balance by finding out how long people can stand on one foot.
a. How would you rephrase the question from Exercise 7 to create a statistical question using this definition of balance? Explain your reasoning.
Answer:
a. Answers will vary. Sample response: What is the typical length of time that a seventh grader can balance on one foot? The data collected to answer this question will have some variability—1 min., 2 min., 2 min. 10 sec., and so on. So, it is also a statistical question.

b. What should the class think about to be consistent in how they collect the data if they actually have people stand on one foot and measure the time?
Answer:
Sample response: Would it make a difference if students stood on their right feet or on their left? How high do they have to hold their feet off the ground? Can they do it barefoot or with shoes on? Would tennis shoes be better than shoes with higher heels? What can we use to measure the time?

b. How would you conduct the activity?
Answer:
Sample response: Students will stand for as long as they can using whichever foot they choose in their stocking or bare feet with their eyes open. We will time them to the nearest second using stopwatches from our science class. We will have students do the activity one at a time out in the hall so they cannot see each other.

d. What would you accept as evidence that there actually is a difference in how long sixth graders can stand on one foot compared to seventh graders?
Answer:
We will compare the shape, center, and spread of the sample distributions of times for the sixth graders and do the same for the seventh graders. If the mean times are fairly close together and the spreads not that different, there is not really evidence to say one group of students has better balance.

Question 1.
The suggestions below for how to choose a random sample of students at your school were made and vetoed. Explain why you think each was vetoed.
a. Use every fifth person you see in the hallway before class starts.
Answer:
Students who are not in the hallway because they have a class in another part of the building would not have a chance to be selected, so the sample would not be a random sample.

b. Use all of the students taking math the same time that your class meets.
Answer:
The students not taking math at that time would not have a chance of being selected, so the sample would not be a random sample.

Question 2.
A teacher decided to collect homework from a random sample of her students rather than grading every paper every day.
a. Describe how she might choose a random sample of five students from her class of 35 students.
Answer:
Sample response: You could assign each student a number from 1 to 35, generate five random numbers from 1 to 35, and choose the corresponding students.

b. Suppose every day for 75 days throughout an entire semester she chooses a random sample of five students. Do you think some students will never get selected? Why or why not?
Answer:
Sample response: Over that many days, it should almost even out. If you think about 375 numbers generated all together with each number from 1 to 35 having an equal chance of showing up each time, then each number should be in the overall set about 10 or 11 times. I generated 75 random samples of numbers from 1 to 35 and looked at how the numbers showed up. Every number from 1 to 35 showed up at least three times, and most of the numbers showed up about 10 or 11 times.

b. A random sample of the grocery prices on a weekly flyer
Answer:
Sample response: Instead of cutting out all of the prices and putting them in a bag, you could just number them on the flyer and use the random number generator to select numbers to identify the items in the sample and use the price of those items.

Question 4.
Sofia decided to use a different plan for selecting a random sample of books from the population of 150 top-selling children’s books from Example 2. She generated ten random numbers between 1 and 100,000 to stand for the possible number of pages in any of the books. Then, she found the books that had the number of pages specified in the sample. What would you say to Sofia?
Answer:
Sample response: She would have to reject the numbers in the sample that referred to pages that were not in her list of 150 books. For example, if she gets the random numbers 4 or 720, she would have to generate new numbers because no books on the list had either 4 or 720 pages. She would have to throw out a lot of random numbers that did not match the number of pages in the books in the list.

It would take her a long time. But if there were no two books that had the same total number of words in the population, it would be a random sample if she wanted to do it that way. However, because there are quite a few books that have the same number of words as other books in the population, this method would not work for selecting a random sample of the books.

Question 5.
Find an example from a newspaper, a magazine, or another source that used a sample. Describe the population, the sample, the sample statistic, how you think the sample might have been chosen, and whether or not you think the sample was random.
Answer:
Responses will vary depending on the articles students find. For example, “an estimated 60% of the eligible children in Wisconsin did not attend preschool in 2009.” The population would be all of the children in Wisconsin eligible for preschool in 2009, and the sample would be the ones selected by the study. The sample statistic would be 60%. The article did not tell how the sample was chosen but said the source was from the Census Bureau, so it was probably a random sample.

Question 1.
Name two things to consider when you are planning how to select a random sample.
Answer:
Answers will vary.

Question 2.
Consider a population consisting of the 200 seventh graders at a particular middle school. Describe how you might select a random sample of 20 students from a list of the students in this population.
Answer:
Answers will vary. Number the students on the list from 001 to 200. Using a random number generator, get 20 different random numbers between 001 and 200, and then select the students corresponding to those numbers on the list. It would also be correct for a student to say that she would write the 200 names on slips of paper, put them in a bag, mix them well, and then select 20 names from the bag.