Therefore, we can say that the set of natural numbers is commutative property under addition and multiplication but the case is not the same for subtraction and division. So, the commutative property of N is stated as follows: For all x, y ∈ N, x + y = y +x and x × y = y × x.

Distributive property of natural numbers states that expression with three numbers x, y, and z will be given in the form of X (Y+Z) then it will be resolved as XY+ XZ or X(Y-Z) = XY-XZ, which means that the operand x is distributed among the other two operands, y, and z.

Therefore, we can say that the set of natural numbers is associative under addition and multiplication but the case is not the same for subtraction and division. 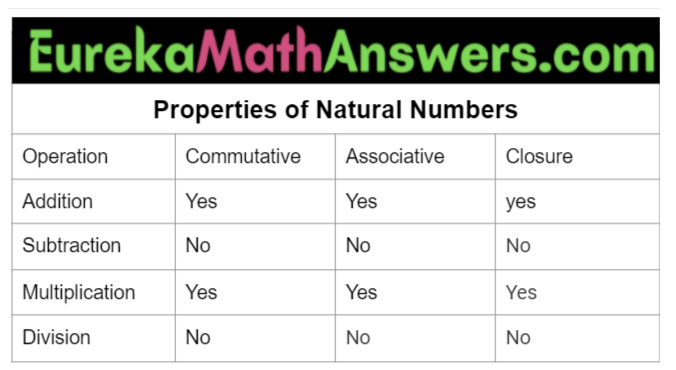 FAQ’s on Properties of Natural Numbers

1. What are Natural numbers?

A. As we know that 0 is neither positive nor negative, it is however considered a whole number despite not being positive. Hence, it comes under a natural number as well. It will be presented on the number line to identify numbers in a set but we can’t use it to count anything.

3. Write the difference between the natural numbers and whole numbers?

5. State the properties of Natural Numbers?

A. Natural numbers have four properties, which are as follows:

Addition and multiplication are the operations for which a set of natural numbers follows as most of the properties. However, division and subtraction do not follow those properties.