This article aids you to know the concept of the Midpoint Theorem on Trapezium. In geometry, triangles and other shapes play a prominent role to construct geometrical shapes. Likewise, the trapezium is one of the concepts of geometry in mathematics. Trapezoids are also known as one of the types of quadrilaterals.

By the end of this page, kids will get complete intelligence on Trapezium and prove the given statement of the midpoint theorem on trapezium. Also, we will have a glimpse of the types of trapezoids along with the statement, construction, proof of the Mid-point Theorem on Trapezoid.

The trapezium is defined as a quadrilateral that can have one and only pair of parallel sides. The following are the different types of trapezoids. 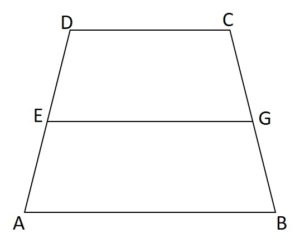 where E and G are the midpoints of non-parallel sides DA, CB respectively.

Consider a trapezoid ABCD, prove that

From the above trapezoid ABCD,

draw a line from point D to point B and join both the points.

Through midpoint E, construct another line where EH ∥ AB.

Since AB ∥ DC (given) 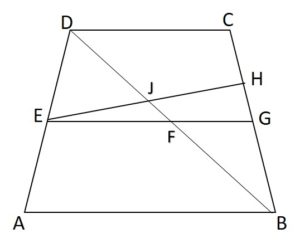 E is the midpoint DA (given)

⇒ J is the midpoint of DB. (by the converse of midpoint theorem)

J is the midpoint of DB.

But, G is the midpoint of CB (from given)

If H coincides with G

But, EH ∥ AB (by construction)

In ∆DAB, the line segment EF joins the midpoints of the sides DA and DB.

In ∆BCD, the line segment FG joins the midpoints of the sides DB and CB.

Hence, the statement is proved.

FAQ’s on Midpoint Theorem on Trapezium

1. What are Trapezoids?
Trapezoids are four-sided polygons that have two parallel sides and two non-parallel sides. Sometimes, a trapezoid is also known as a trapezium.

5. How do you find the midpoint of a trapezium?